The International Asian Fashion Awards was to be held at the London Hilton Metropole. We knew which suite the event was to be held in so I was able to obtain detailed measurements of the area and created this scale model. There were photos of the space from which I was able to sample details like the exact carpet and the unusual looking ceiling.

The project manager had supplied a lot of information about the set and every element down to the speakers. The lights were also detailed to me so I was able to simulate their combined effect. The more information that is available the more likely you are to get something which looks realistic.

Normally when I create a 3d model for a trade fair, it’s the detailed plan of one exhibitor stand within the show. But for this government-sponsored careers exhibition which was to be held at Dundee’s Caird Hall, I was asked to model the entire space and the layout of all the stands within.

Because of this, the animation is a little sketchy on detail but it was able to show the event planners the broad strokes of how the event would be laid out, using the entire space including the stage.

This 3d event plan for Breast Cancer Care had at its heart the fashion show which was the main feature of the night. But it also had to show how the event would make use of the whole space, not just the auditorium. It was to take over the entire top floor of the Radisson Hotel in Glasgow so a site visit was made, where I took extensive measurements and photographs of the space prior to constructing the 3d model.

There were various details the event manager wanted to include beyond the stage set. The pink lighting was central to the event theme and areas in the foyer were to be allocated for different applications including the sponsor’s wall, where attendees would be photographed.

This conference event for Experian was to be built with an emphasis on contrasting textures. The event manager had a large variety of materials which he showed me and explained how they should be layered to create depth on the stage. It was important to be able to simulate all these materials fairly realistically in order to help the client visualize the effect. The 3d animation shows the hessian, chicken-wire, marble blocks, brushed suede and beaten copper plate textures, and how they would sit together on the stage. 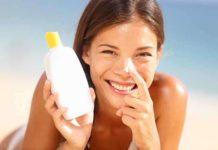 WHY YOU SHOULD STOP SKIPPING SUNSCREEN 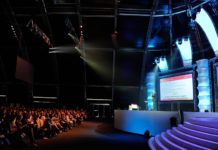